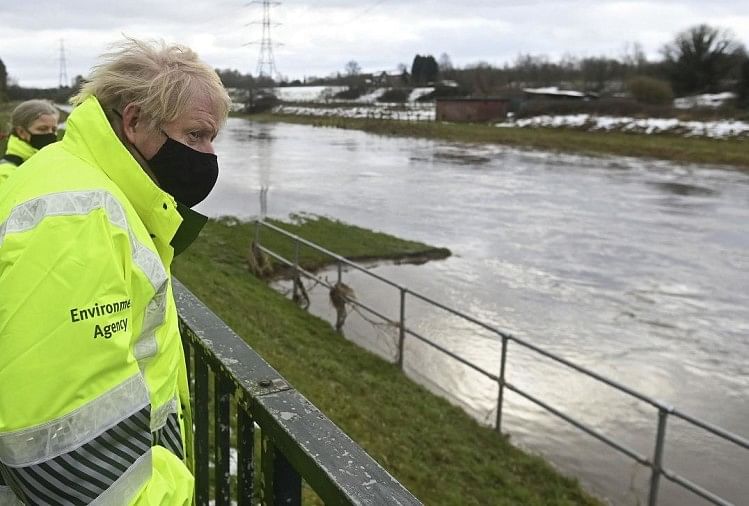 The list of challenges for the UK government is constantly increasing. After fighting the first pandemic, the vaccine raised little hope, then new variants of Corona started to engulf the people there. After the lockdown in Britain, the situation had come under some control now that several parts of the iceberg and cyclone Christoph have knocked it there.

Due to this storm, many areas including England have been flooded, which is having a direct effect on vaccination. However, to continue the vaccination campaign in Britain, the administration converted a church into a vaccine center. In addition, British Prime Minister Boris Johnson visited the chopper flood affected areas on Thursday.

According to Britain’s Meteorological Agency, two thousand homes in East-West Dadsbury and Northerden in England have been evacuated. The Swollen river water level has risen to 10.7 feet, breaking the 2016 record of 9.8 feet.

A local UK leader, Mark Pritchard, said that the Oxford Vaccine is stored in a warehouse at the Industrial Estate. He said that we have to make sure that the vaccine is not damaged in the flood. The plant has been given the task of producing 300 million doses of vaccine every year.

The local leader said that the plot is near the river and its water level has risen to its highest record level since the water gauge was commissioned in 1996. Talk about the relief work, so far, two thousand houses have been evacuated in flooded areas. Apart from this, people have been rescued and taken to a safe place.

The floods caused by the storm have flooded most areas and caused damage to many buildings. Three feet of snow has fallen in England and Scotland. More than two hundred roads are closed here and people are being advised to stay in homes.

Farmers Protest: After The Tractor Parade On Republic Day On January 26, Farmers Will Start Campaign In Villages